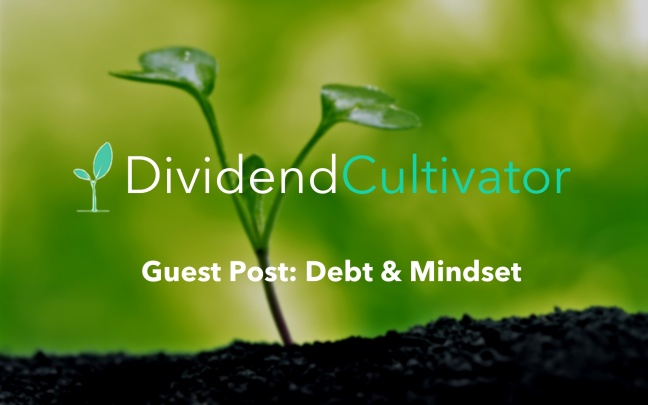 From time to time, I’ll be inviting other creators to share posts on their unique strategies. Jeremy, aka Hipster Finance, is one of my favorite people on Twitter.

Hipster dishes out hot takes on debt, investing, and other personal finance topics. His main claim to fame is budgeting though. Today he talks about the psychological effects of debt and how paying off debt is a mindset hack.

The debt free community is a loud one.  They make their life about getting rid of and never using that four letter word (D*BT!).  They don’t use credit cards (no points!).  They say it’s the only path to financial freedom.  And the key to personal finance.

But this often disagrees with money data.  Debt defenders cite interest rates, opportunity cost, and inflation as examples on why paying off debt is dumb.  And in many cases, the math backs them up.

A few of the things they say:

Interest Rates:  These are super low right now.  There were times when borrowing money cost you far more (like 10-15% more).   In some cases, your rate may be so low that paying it off isn’t saving you money in the long run.

Opportunity Cost: This is the profit you miss out on by deploying your cash to debt vs. other investments.  For example, let’s say you pay $15,000 to pay off your car.  Your car is now paid off!  But you could have kept paying your normal car payment and instead invested that $15,000.  That investment could wind up paying BIG.  If you only pay off your car with that money, you miss out.

Inflation:  This plays along with low interest rates.  If your interest rate is close to 2% — that’s close to the rate of annual inflation (2%).  If inflation continues to rise, that would mean that future you would be paying off your debt with cheaper money.  Because of this, it’s in your best interest to delay paying it off as long as possible.  This is a difficult concept for some to understand, but in a case like this your loan almost pays you over time.

So Where does the Truth Lie?

As with most things, somewhere in the middle.  Robert Kiyosaki has a great quote, “There are three sides to every coin (Heads, Tails, and The Edge)”.  The edge is our ability to see both sides and come to the wisest conclusion.  In this case, while paying off debt isn’t ALWAYS the thing that makes the most financial sense — for your mindset there can be nothing better.

When you make an obligation to pay for something (whether that’s a credit card bill, a car OR a student loan) you made an obligation.  If your decision is to run from that obligation, it does serious damage to your mindset.  Do this enough times and it becomes your default.

Instead of accomplishing the tasks you set out on your choice will most often fall back to what is easier.  You have conditioned your mind to avoid your obligations when they seem too difficult.

That’s why on this point I side with the debt free community.  Not because debt is dumb (sometimes it’s smart!).  But because paying off your debt says to your mind that you do what you say you will.  You smash your goals.  You follow through.

This is why you so often see people come out of their debts and go on to do amazing things with their money.  If they could pay off $100,000 in debt, what is so scary about a little consistent investing?  They have built the discipline and focus on the future that every investor needs.  And every successful person will tell you that mindset is 90% of what they do.

Meanwhile, the person that avoids their debt (via bankruptcy, forgiveness, etc.) doesn’t learn those lessons.  The short cut saves time, but it often lacks the view.  That’s why any wise teacher makes you spend time on the basics before learning the craft.  Remember the scene in The Karate Kid where Mr. Miyagi makes Daniel wax cars and paint fences?  Daniel wanted to learn how to kick ass.  But instead, he was doing busy work.  But the busy work was the basics.  Waxing cars used the same repeated motion as a block.  Painting the fence – another version of a block.  The basics teach the behaviors.  The behaviors lead to the end result.

The other important factor that makes paying off debt the smart choice is the unknown.  The investing community is often great at finding the best return for your money.  What they aren’t great at is understanding that things change. The housing market was on FIRE leading up to the 2008 bubble.  Investors couldn’t get enough of those amazing returns, and some lost it all when it changed.   The ‘dot com’ bubble in the stock market in 2001 was similar.  Everyone was making so much money no one realized it could change.  And then it did.

As Hemmingway wrote in the Sun Also Rises, “How did you go bankrupt?” Bill asked. “Two ways,” Mike said. “Gradually and then suddenly.”

When you have outstanding debt, it feels fine when things are good.  Money is coming in.  You can pay your debt at any time.  But the second your income dries up, that debt feels like a lead weight in the water ready to take you to the depths.  Clearing your debt enables your mindset to focus on what matters.  You can look to grow your money without having to worry about repaying old debts.  I always say, I sleep better at night.  And that doesn’t factor in a math equation.

To summarize, paying off your debt doesn’t always make the most financial sense.  But it’s often the best decision you can make.  You might have random people in your life make fun of you for doing it (or people on the internet!).  But these people don’t live your life.  They don’t have to deal with the consequences should things go wrong.

Think on this the next time you see someone talking about debt and how to handle it.  It’s your debt.  You decide what you want.  But know this – your life is not a math equation.  There are complexities to it that don’t always fit in a spreadsheet.  In the end, paying off your debt does more for your mindset than it does for your finances.

Many people new to Personal Finance go straight into investing without taking the risk out of their personal cash flow. You could be massively increasing your cash flow by having a good budget in place. Check out the Hipster Budget Guide (affiliate link).

eBook: Too Much Money

The content on this site  references an opinion and is for information purposes only.  It is not intended to be investment advice. Seek a duly licensed professional for investment, legal, and tax advice.

Financial tidbits for a better sleep

dividendcultivator.wordpress.com/
Time In the Market

Save Smart, Live Well, Be Healthy, Grow and Enjoy the Ride